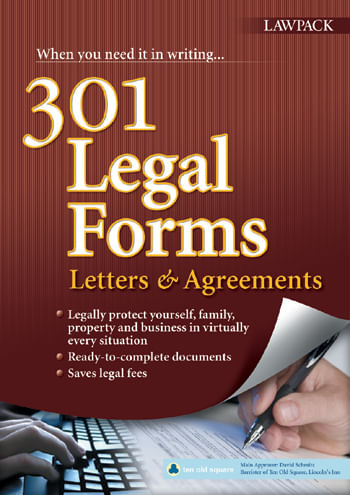 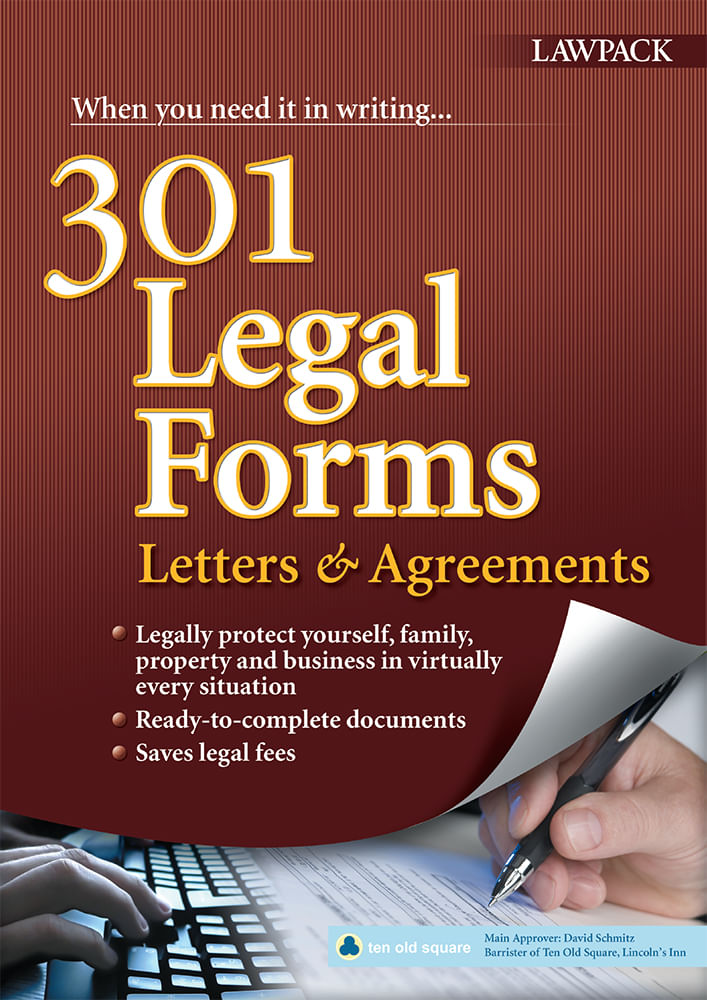 301 Legal Forms, Letters and Agreements will help you get it in writing. It contains a legal form for practically every home and business need.

Start saving legal fees now with this compendium of legally valid legal forms for use in both your business and your everyday life.

You know how it is. You just want to get something in writing... but you don't want to pay the legal fees involved in getting a legal professional to draft it for you.

If there is a simple legal template for what you want, you will find it in 301 Legal Forms, Letters and Agreements, with instructions on using and completing each legal form.

What you get is quite simply a huge range of solutions in one bestselling paperback book, packed with draft letters and pre-printed legal forms covering a wide range of legal situations.

It provides a complete DIY law library of 301 ready-to-use legal forms and documents, written and approved by solicitors, for business or personal use. It is there to safeguard your legal rights and protect you, your family, your property and your business from everyday legal problems, without the inconvenience or cost of using a solicitor.

Using 301 Legal Forms Letters and Agreements is an ideal way of getting it in writing.

What better way is there to document your important transactions, avoid costly disputes and enforce your legal rights? In a few minutes you can draw up the legal form or agreement you need to sidestep misunderstandings, comply with legal obligations and avoid liability.

301 Legal Forms Letters and Agreements is invaluable to any individual or business who wishes to save legal fees!

Anti-Gazumping Agreement
An exclusivity contract between the buyer and seller of property, protecting the buyer against being gazumped

Assignment of Accounts Receivable with Non-Recourse
An agreement by which a creditor sells his interest in a debt to a third party.This form must be used in conjunction with the Notice of Assignment which the assignor should send to the debtor

Board Resolution: Appointment of Auditors
Resolves to appoint auditors

Board Resolution: Approval and Registration of Transfer of Shares
Approves the transfer of shares from a shareholder to someone else and resolves to register those shares in that person’s name

Board Resolution: Approval of Directors’ Report and Accounts
Resolves to approve the directors’ report and annual accounts

Board Resolution: Proposal of Alteration of Articles
Resolves to hold an extraordinary general meeting to propose changing the articles of association

Change of Address Notice
Letter notifying a change of address

Company Let
A rental agreement to let residential property to a company for the temporary use of its employees, officers, or visitors

Credit Reference
A response to a request for a credit reference

Dismissal, Disciplinary Rules and Procedures
A document which sets out an employer’s disciplinary rules and procedures policy

Employee Agreement on Confidential Information, Inventions and Patents
An agreement between a company and an employee that the employee keeps proprietory information confidential and waives rights to any inventions

Employee Warning
A notice to an employee of unsatisfactory work performance

Letter to Employee, Absent Believed Sick
A letter from an employer to an employee asking for reasons for absence

Letter to Shareholders and Auditors with Resolution to be Passed
A letter from a company to shareholders enclosing a written resolution for the signature of shareholders, together with a letter to the company’s accountants

Letter to Unsuccessful Candidate
A letter to an unsuccessful job applicant

Letter Treating Breach of Contract as Repudiation and Claiming Damages
A letter from one party to a contract to another cancelling the contract, claiming that the other party has not performed their obligation

Lodger Agreement
A standard agreement for letting a room in a furnished house or flat with a resident owner, in which common parts of the property (e.g. bathroom, lavatory, kitchen and sitting room) are shared

Notice Requiring Possession: Assured Shorthold Tenancy Agreement
A notice from a landlord to his tenant that he requires possession of the property at the end of the tenancy agreement

Notice to Employee being Laid Off and Giving Guarantee Payments
‘Guarantee’ payments must be made to employees with at least one month’s service, when they would normally expect to work but no work is available

Notice to Terminate Given by Owner – House/Flat Share Licence Agreement,Resident Owner
A notice from a resident owner to the sharer that he requires possession of a property

Notice to Terminate Given by Sharer – House/Flat Share Licence Agreement, Resident Owner
A notice from a house or flat sharer that they wish to terminate a rental agreement with the resident owner

Pay Advice
A form advising employee of salary and deductions

Personal Property Rental Agreement
An agreement between an owner and a renter for the use of personal property, for example, a boat

Product Defect Notice
A letter from a customer advising manufacturer, distributor or seller of a defective product

Quotation
A supplier’s written statement of prices for specific goods

Receipt in Full
Basic receipt for money paid on account

Request for Replacement Share Certificate
Also known as a letter of indemnity; a notice to a company secretary of the loss of a share certificate and the request for a replacement

Resignation
A general form of resignation from an office or job

Solicitor’s Charges: Remuneration Certificate Request
A letter requesting a certificate with which you can obtain a judgement on whether the solicitor’s fees are too high; obtained by the solicitor on your behalf

Waiver of Liability and Assumption of Risk
A document by which a customer agrees not to hold a supplier liable for any loss, damage or injury suffered by the customer

Water Supply Interruption: OFWAT Investigation Request
A letter requesting the intervention of a regional Office of Water Services customer service committee in a dispute with the water company in its area.